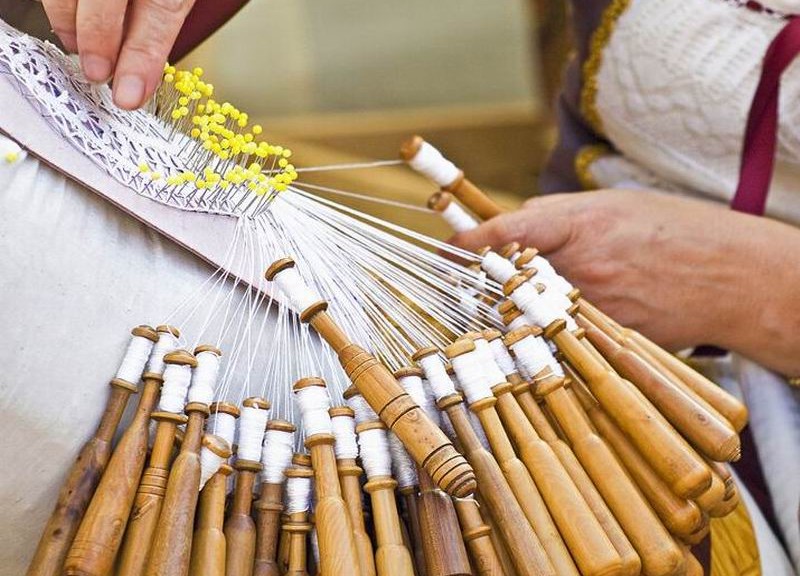 All along this area, people do lacework. If there is a typical image of this area is the one where we can see a groupe of women doing bobbin lacework (“palillear” is the term used). These women with loads of patience make this beautiful lace that is sold worldwide. The main characteristic of this lace is that is handmade by turning the bobbins with the threads right and left above a cardboard stencil of the design.

This technique that comes from the trading with the ports of Flanders in the 16th century, has been developing along this area reaching a level of perfection in the art of bobbin lacework. Tablecloths, bed linens, quilts, cloths, wedding dresses are made by these female artisans that, bobbin after bobbin, pinhead after pinhead, keep this artistic expression alive.

As History says, in the 17th century, some nobles came back from the war in Flanders married with women from that region who brought new techniques. At that time, the lacework was already known and appreciated by the upper classes, reaching its highest splendor in the 18th century, thanks to the refinement of the technique and the creation of the first “palilladas”, a costume that still remains nowadays, whose main purpose is to gather these women in front of their houses to carry out their work.

At the end of the 19th century and beginning of the 20th loads of this lacework was exported from Camariñas to America. However, these exports were interrupted because of the colonial crisis and the world wars.

When the conflicts reached an end and after being once again organized, this activity flourished again and it still remains nowadays. With more than 2,000 women (¨”palilleiras”), the bobbin lacework made in Camariñas is really popular in fashion, in lingerie collections and in decoration.

During the “Mostra do Encaixe” (an exhibition of this lacework), which has taken placed yearly since 1991, thousands of people go to Camariñas to see these women work, but not only the local ones but also women from other countries where this work is carried out.