The name “Roncudo” has its origin because “ronco” in Spanish means hoarse that seems to imitate the noise the sea produces when it hits these cliffs. The simplicity of this lighthouse built in 1920, with its 11-meter height and the fact that it is surrounded by granite rocks and a wild landscape wraps the area with an aura of mystery. The breathtaking viewsof the estuary of Corme and Laxe completes the whole vision.

The strength the sea hits these rocks with and the characteristics of its water makes this area be an ideal place to hunt the famous gooseneck barnacle of O Roncudo, which is acknowledged as the most delicious one in Galicia and that is hunt by the brave fishermen that fight in these extreme conditions that have provoked some casualties so far as the 2 crosses we can see next to the Faro reminds us. 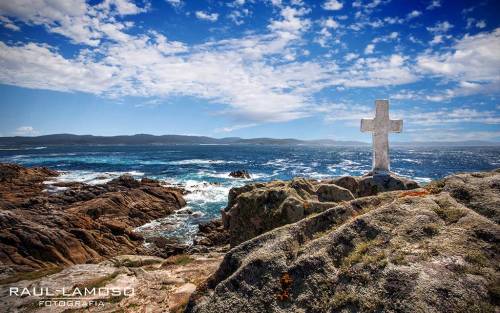 It is here in O Roncudo where lots of ships wrecked as they were not able to survive to the conditions of A Costa da Morte.