<<Lighthouse in the Port of MalpicaArea Maior Beach>>

Malpica history is closely linked to its fishing port and whaling. There are records from the 17th century of this kind of fishing carried out by these brave seamen with the help of some highly experienced whalers. The cardinal Jerónimo Hoyo said: “This village is the one where most whales are hunted in Galicia. There are big slaughtering every winter and it brings huge benefits as 200 hundred arrobas or oil “cántaras” (a type of metal containers) from a whaler ship regardless its size. The people from Malpica sell them to people from Biscay and they have to pay for this business 7,000 maravedises (a Spanish old coin) to the archbishop of Iria Flavia as a fixed fee”. 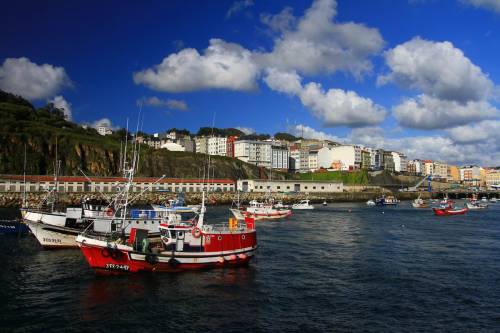 It´s known that this tough sea typical in winter was favorable for the whales that on their way through the Gulf Ártabro were spotted from the SisargasIslands and also from the Atalaia one. The lawyer Molina when describing the GaliciaKingdom said: “As these ports are very tough whales usually get to the areas where the waves and the sea are “high”. And that´s why, here, in some parts of the year, there is a huge slaughtering of them mainly in December, January and February, which is the best moment, there are big slaughterings”

This whaling past was still kept in some houses in Malpica, where the whale vertebra are used as seats and big bones are even used as the beams of the roofs of these houses. 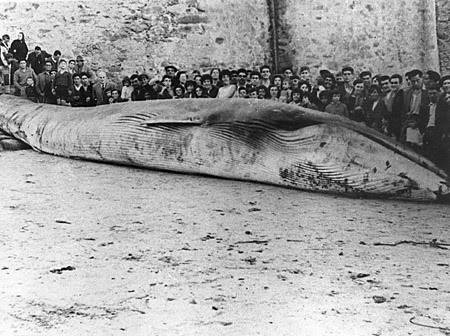 After the decline of whaling and the Civil War, it was really hard for these fishermen to survive by means of the inshore fishing. However, most of them came across with the solution overseas in a village in Perú, called Chimbote. The businessman from Corcubión (a village on the coast of Coruña) Benigno Lago had settled there in the 30s to exploit the fishing of anchoveta to produce fishmeal. In the 1950s, over 300 hundred families mainly from Malpica and Corcubión set off to Chimbote to seek their fortune overseas.

Some of the ones who got there had to overcome huge difficulties. Running away from the Civil War, between 1937 and 1938, they had led to France on the Montevideo (11 men) and on the Rocío (29 men). The passage was really dangerous but the other option even worse.

On the Eve of 29th August, the sea was calm and evading the Franco´s dictatorship vigilance, the Saint Adrián set off with 26 men. They only knew they had to sail northwest for 36 hours and then turned towards the East, without radars, without radios and with provisions for only 2 days. After 3 days, without food supplies on the verge of collapse, they were helped by a Nazi war ship confused them with some ship-wrecked castaways and provided them with food and some fuel to get to Brest.

Once they were on the Republican side they fought on the Aragon front till the defeat made them exile in France for second time. It is then, when on 5th August, 1939, 12 out of the 26 men from Malpica embarked on the Winnipeg,chartered by Pablo Neruda leading to Chile. They stayed there for a few months till they went to Chimbote led by Benigno Lago.

Here in Galicia, they worked a lot but they earnt nothing at all. Overseas, they could become vessel owners by working a bit and with a bit of luck. The amount of anchoveta was huge so, the vessels loaded tons of them every tide. These were times of plenty and the population virtually tripled in 10 years. These emigrants used to gather in the newly-built Spanish Casino. Chimbote was broadly known as the village where the shilver shines as the anchovy and runs as a ray.

However, there was a point when the anchoveta vanished. The overexploitation of the fish stocks, the lack of modernization of their factories and the change of the ocean currents together with the warming of the ocean waters brought about a deep crisis in the sector. Besides, Perú had nationalized its fishing, so it was not that profitable and many of them had returned to their country. To make matters worse, on 31st May, 1970, a devastating earthquake of magnitude 7,9 ripped through the city caused tens of thousands of victims. This earthquake was the end of the History of this city which, despite being so far, had an enormous influence on the History of Malpica.

Along the way leading to the port of Malpica, we can see the women repairing the fishing nets and those people who unload the sardines and the horse mackerels from those boats that have just arrived from fishing. At the end of the pier, some fishers with their fishing rods spend some time fishing squids surrounded by the seagulls squeaking around whereas they look tirelessly for their food at sea and on land. 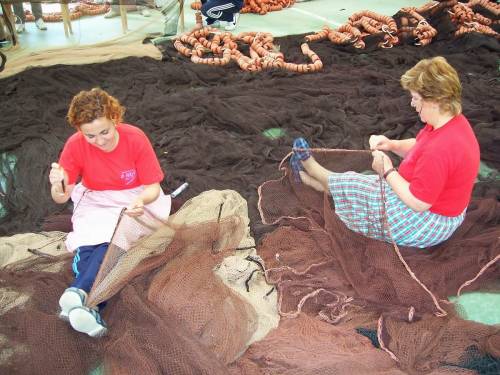 Then, we go on towards the Lonja (fish market), where the fish and seafood catches are distributed in a unique auction. The buyer sees the goods and the auctioneer starts with a high price that he reduces little by little. When the prices reached is kind of interesting, the buyer stops the auction and takes with him/her the product.

Inside the dock, the boats rest perfectly in line waiting for the next tide. There are some buildings that seem to be stacking blocks as the Tetris, which seem to be over the dock looking at the port with a kind of irregular with different shapes and colors but amazing skyline. 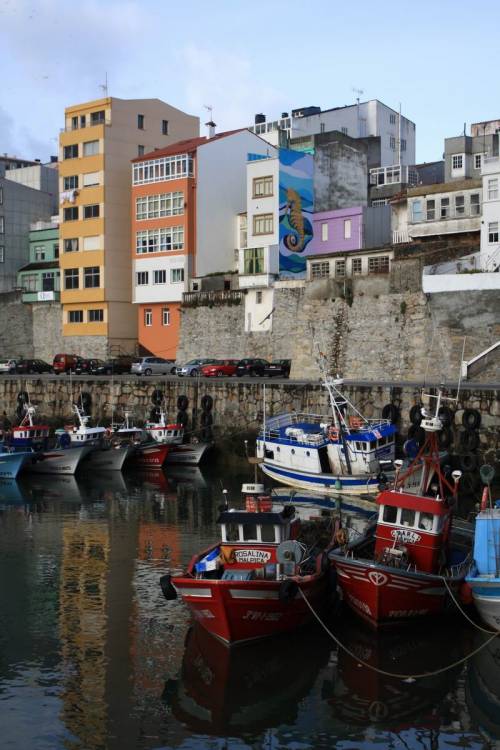 During the Festival of the Sea, all these vessels leave the port to honor the Virgen Carmen, the patron of the sailors, in procession till The Sisargas Islands and it is followed by a large crowd of people.

We leave the port walking up the steep hill of the Lonja which will lead us to the beach Area Maior along the promenade Caldeirón.