O Camiño dos Faros gets to Santiago de Cereixo, which belongs to the municipality of Vimianzo. It is a different landscape and strategic for the trade as it did already exist in the 10th century, but the lootings of the Vikings and Arabians all along the centuries 12th, 13th destroyed it. In order to re-found it, the king Alfonso XII provided it with the “carta puebla” and several privileges, visiting it in 1228 and making it stronger in front of the feudal lords. Its port was really important at that time. 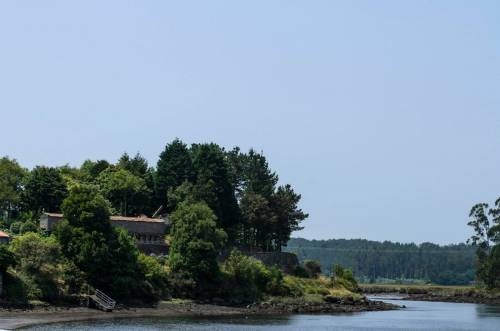 Before arriving, we are impressed when we see the silhouette of the 19-foot “hórreo”, one of the biggest in Galicia. It is placed in Vila Purificación, a baroque “pazo” that dates back to the 18th century where the taxes had to be paid and it also has a pigeon house.

We take the way that takes us to the riverbank by taking it among the first houses. The first thing that we see is an invention, the “Mill of the tides”, which was created centuries ago. It was built in 1679 by the family Moscosos and Altamira. This mill used not only the force of the river Riotorto but also the tides of the estuary to grind. Now, it is being used as a house whose main door is reached by using a wooden walkway (kind of small bridge) over the river.

From the mill, the path takes us to the riverside walk, with several information panels that will help us to get to know more the fauna and flora of this area. On the other side, we can see beautiful hanging houses. It seems as if the time has not gone by them. We use these nice shadows the river provides us with to stop to have something to drink and eat. We have done less than half of the stage, so we can`t stay there long if we want to arrive in Muxía.

By the stairs, we can get to Santiago de Cereixo´s church, that was built in the 12th century, keeping from that time the Romanesque ground plan and part of its walls. 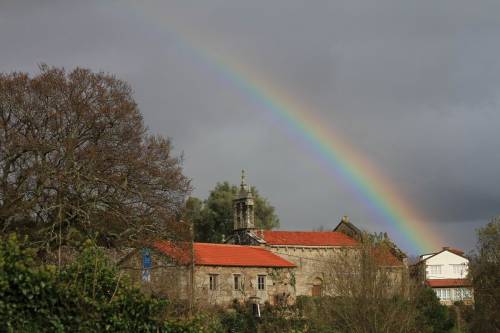 The most attractive part is the tympanum of one of its doors, made in the 12th century. It is the oldest representation graved in stone of the scene that represents the moment when the Apostle Santiago was taken to Galicia on a boat with 7 disciples. 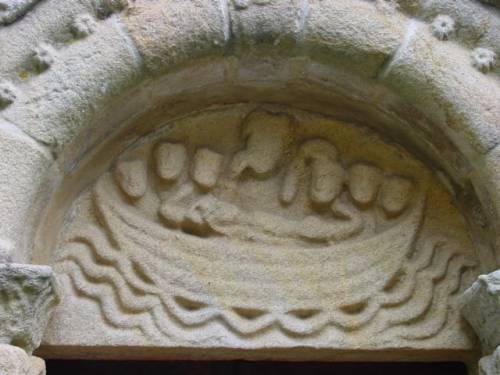 Next to the church, we see the robust Towers of Cereixo, built by the lords Calo and Carantoña in the 17th century, probably above a fortress that protected previously the mouth of the river from the continuous raids by the Vikings. When its role as a defensive building vanished, a new building was built to link both crenellated towers.  So, the ground floor was used as the place where the inhabitants paid their taxes, and the upper area as a dwelling.

On the main façade and on the lateral one, the shields represent most of the noble families, that had been in a particular moment, the owners of this “pazo”. At the beginning of the 20th century, the last owner descendant of these lineages had to sell it. Nowadays, the owner is an architect and visits are not allowed, but, as we can see from outside, it is in very good condition, so, well maintained.

In the middle of the square, there is an impressive oak whose age is unknown but what we actually know is that it is at least some centuries old, even older than the towers. The place under the tree top is also a good spot to rest as we deserve after the walk. 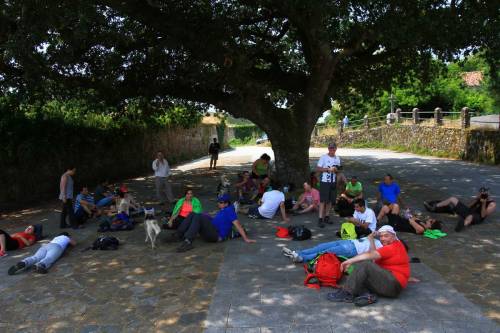 What do you think about this part of the route? We have left the coastline and got into the banks of the river Grande, a stretch that is full of life and history. We do believe it is worth walking it. Now, we have to stand up, as there is half of the stage left.